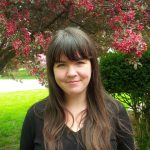 Susannah Mulvale is a PhD student at York University’s History and Theory of Psychology program and is working under the supervision of Dr. Thomas Teo and Dr. Alexandra Rutherford. Her research focus is on how philosophy, especially the phenomenological and postmodern traditions, can be used to enhance empirical psychology by providing theoretical and critical understandings of subjectivity.

Susannah is especially interested in how these philosophical traditions highlight the important relation between individuals and social structures, and encourage the development of critical thinking and political engagement as a means to achieving the psychological aim of mental well-being. While her work thus far has largely focused on phenomenology and Foucault, she is currently exploring the potential contributions of Deleuze’s philosophy to psychology as a way to develop the discipline in more politicized ways.

Susannah’s interest in the intersections between philosophy and psychology arose at the beginning of her academic career when she discovered how phenomenology provided a theory of subjectivity that went beyond the natural scientific perspective of empirical psychology and provided a rigorous analysis of experience from the first person perspective. She was especially struck by Merleau-Ponty’s phenomenology of perception and his focus on the embodied nature of experience. While pursuing an MA in Philosophy at the University of Guelph, Susannah explored the roots of phenomenology and its connection to psychology in Husserl’s critique of psychologism and his argument for phenomenology as the proper foundation for empirical psychology. Later Susannah became interested in how postmodernism and critical theory could also complement psychology in different ways than phenomenology by emphasizing the ways in which subjectivity is not just a matter of individual experience, but is also shaped by the social and political configurations in which it is embedded. Susannah’s work is continuously motivated by what she sees as the need for psychological thinking to move beyond individualism and the natural scientific model towards the incorporation of philosophies that can provide theoretical depth to psychology along with sociopolitical analyses of human experience.

If you are a faculty member at a Canadian institution interested in joining the network please contact Michelle Lafrance at lafrance@stu.ca